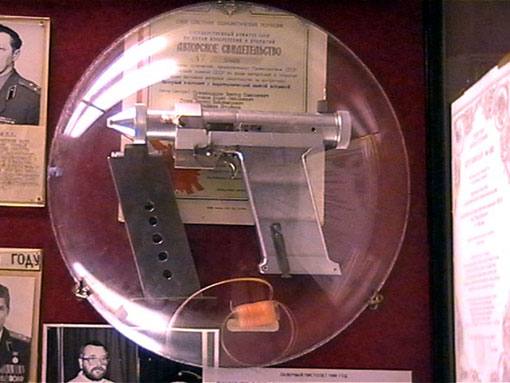 LASER PISTOL with pyrotechnic LAMP -VSPYSHKOY  In the 70's. XX century. many countries, especially the Soviet Union and the United States, have been deployed in the implementation of the laser systems as a peaceful, well Military appointments. Staff Military Academy of Strategic Rocket Forces (RVSN), now named after Peter the Great, in compliance with the development of individual laser weapons in self-defense astronaut. Study Group headed by the Chief of the department, Honored Worker of Science and Technology of Russia, PhD, Professor, Major-General Victor S. Sulakvelidze (1919 - 1984). Theoretical and experimental research destructiveness laser gun worked PhD, Professor Boris Duvanov. The design of future weapons and spend researcher of the AV Simonov, participated in the testing researcher of the LI Avakyants and Associate VV Gorev. Designers aim to develop a laser gun that weight and size are no different from the army firing analogue. In the first phase of the authors of future inventions found that for the withdrawal of a sensitive elements of optical systems enemies need not very high energy radiation - within 1 - 10 J. This is because the eye and optics focus the rays, increasing the density of radiation in the hundreds and thousands times. The elements of any laser are active Wednesday, a source of pumping and the resonator. To meet the task required a small source of optical pumping deployed in the cavity oboymy with bullets. The authors decided to apply the one-design fireworks flash-lamp filled with oxygen and metals in the form of foil or powder. Podozhzhenny electrical spark, it burns for 5-10 ms at a temperature of about 5 thousand degrees C. (involuntarily recall pyramids hyperboloid Engineer Garin). Meanwhile, all components must be non-toxic and not prone to self-sustaining detonirovaniyu. To increase energy pumping, it was decided to use zirconium foil instead of the commonly magnesium, which is 3 times has increased the unit of light energy. Additives metal salts allowed "fit" light the lamp to the absorption spectra of the active element. All the experimental work is performed directly sponsored development. The first home-made lamps were kind of cone 1 cm in diameter, located inside the tungsten-renievaya fiber coated fuel paste for burning pyrotechnic mixture (zirconium oxygen). Eight lamps, outbreaks are housed in oboyme. After each "shot" spent lamp vbrasyvaetsya as bush and the next is fed into an illumination chamber. The ability to blind and burn beam remains at a distance of up to 20 hours Various modification devices can be used not only to defend themselves, but also as a medical tool. Work on the individual laser weapons was devoted to teaching and popular film "Dangerous ray", created in the studios Ministry of Defense of Russia. Currently, the laser gun is stored in the Museum of History Military Academy RVSN behalf of Peter the Great. 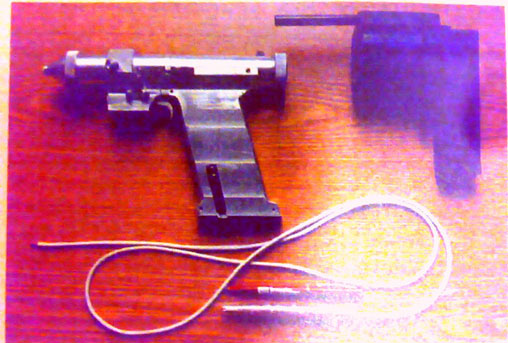