This year’s International Astronomical Camp “Letenka”, which is already a traditional annual event in the Southeastern Europe, was held from 21st to 24th of July. This was the 10th time the camp was held and as one of the organizers, Aleksandar Zorkić, editor-in-chief of “Astronomski Magazin”, an astronomy magazine and web-site, said that next year’s camp is also going to be jubilee 10th. Everyone had great expectations from this camp, especially concerning the program.

Let me say, here at the beginning, that the camp was excellently organized and that this year’s organization was much better than that of last year. Participants were notified in time about the program changes and the timetable was carefully organized and frequently updated. The only shortcoming of this year’s camp was the weather, since the organizers do not know how to influence that one yet J, but we had at least one cloudless night good for observations.

Those participants who do not come with their own transportation or do not have transport arrangements meet at the railroad station of Novi Sad and from there they go by city bus (rented, not regular line) to Letenka (a one hour long journey).

By the courtesy of Scout Squad of Sremska Mitrovica, participants who didn’t bring tents could rent one for a symbolic price of 3€ for the whole camp duration. There was also a possibility to buy lunch, coffee, tea, beer, soft drinks and mineral water. The camp was officially open on July 21st, around 18 h local time (+1 GMT, +daylight saving time, so during summer it is +2 GMT) under the main tent, where the lectures were held. During the first night there were two lectures. After the lectures there was a time slot for unofficial conversations about various topics, due to poor weather. Most of the time, the atmosphere under the main tent  was like the buzzing of the bee-hive. 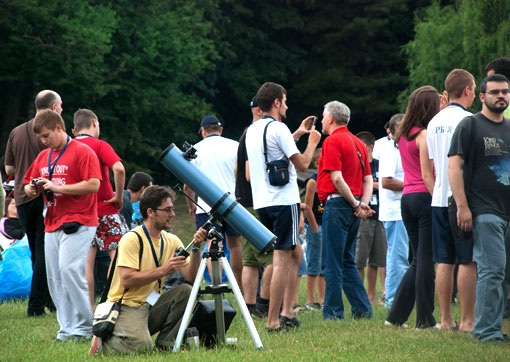 The following day opened with rain so everyone feared that there we’re not going to do any observations that night either, but fortunately we were wrong. Before observations organizers are put on trials to organize six great lectures and to try and stick to the timetable as much as possible. But since it is difficult to say to the lecturer in the middle of his/her lecture that time slot is at the end, especially if that lecturer is a university professor (we had three of them that day, one all the way from Australia). They had one great ally, the weather. Clouds were thick until the lectures ended, but then all of a sudden they dispersed. This favorable weather was put into good use for observation and astrophotography. The opportunity was also seized to hold a sort of observational competition, where competitors had 15 minutes to find as many Messier objects as possible. The winner was the same as on Messier marathon, but the second place was taken by the greatest surprise of the camp, a thirteen-year-old boy who came to the camp for the first time.

The third day started with presentations of astronomical societies attending the camp (but you don’t need to be in an astronomical society to attend the camp). There were societies from Bosnia and Herzegovina (AD "Orion"), Croatia (AD "Anonymous"), Slovakia (astrofoto.sk), Macedonia (AD "Skopje") and Slovenia (društvo "Tamno nebo Slovenije").  Out of Serbian astronomical societies there were ADNOS from Novi Sad, Univerzum from Bačka Palanka, Lira from Novi Sad, Alfa from Niš and  Eureka from Kruševac, as well as our hosts Scout Squad from Sremska Mitrovica "Boško Pakovljević - Pinki" with their astronomical section. This part of the camp covered the activities of the societies and possible cooperation on some events in the near future (International Observe the Moon Night). Afterwards there were again six lectures and two open discussions about astronautics and astrophotography. Among the lectures, there were two that should be pointed out specially. One is about the first completely robotized observatory in Serbia, and the other was on the problem of light pollution and what to do about it in the future.

After the lectures the prizes for the previous night’s competition were presented.

However, the highlight of the day was not the group photo, but something that came immediately afterwards. The organizers  gathered everyone for the launch of a rocket model with a camera attached to it. So everyone gathered and we all did the countdown. The clip is pretty amazing and you can check it out on this link (apologies for the language, it’s Serbian J ): http://www.youtube.com/watch?v=Tcbh3vulapg

And so came the last day of the camp and the necessary packing. Hopefully the camp will be better next year, with more visitors, and an even better organization (especially when it comes to weather J). This was a short account on some of the astronomy activities in Serbia.

And for more photos from the camp go to: http://www.astronomija.co.rs/astronomski-kamp/4534-ak-letenka-2011-albumi.html (unfortunately it is all in Serbian but currently we are trying to translate as much of it as possible into English).